If you are reading this then there is probably no reason to go into the benefits of ditching the combustion of herbs for vaping. The proof is in the economy of use and the savouring tobacco free flavours...There are a littany of pros!

By the same token if you are reading this and you are no stranger to the world of vaping then you are probably more than well aware of the names Storz and Bickel and Volcano.

The Volcano Classic manufactured by Storz and Bickel has been a market leading product for nearly two decades and remains the favourite high end vaporiser amongst enthusiasts for good reason. 2014 saw the release of the Volcano Digital, an upgrade of the basic Volcano that proved highly popular; offering a greater level of temprature control and an easy to use digital interface.

Here in 2021 Storz and Bickel have unleashed their next phase of Volcano upgrades onto the marketplace, the Volcano Hybrid. The release of the new and improved device was followed by crazy sales figures and positive review buzz that generated excitment among the vaping community world wide!

If the Volcano Classic is so great (which it is, no doubt) why all the fuss over the latest upgrade?

Here are five reasons why you as a longtime herbal vaper (or even just starting out) should be getting excited by the prospect of the new Volcano Hybrid!

As mentioned the Volcano Classic has well earned brand recognition and respect amongst the Canna Community. Its sturdy German manufacturing, easy to use controls, rapid heating times, 3 year warranty, easy maintenance, unbeatable quality of vapour and flavour have all withstood the test of time. So by purchasing a Volcano Hybrid you are buying into all the benefits Volcano users have been enjoying for years. It is from this foundation of excellence that the Volcano Hybrid stands...

And yet Storz and Bickel have engineered the Volcano Hybrid to add an impressive range of new features designed for even greater user convenience and increased vaping pleasure! 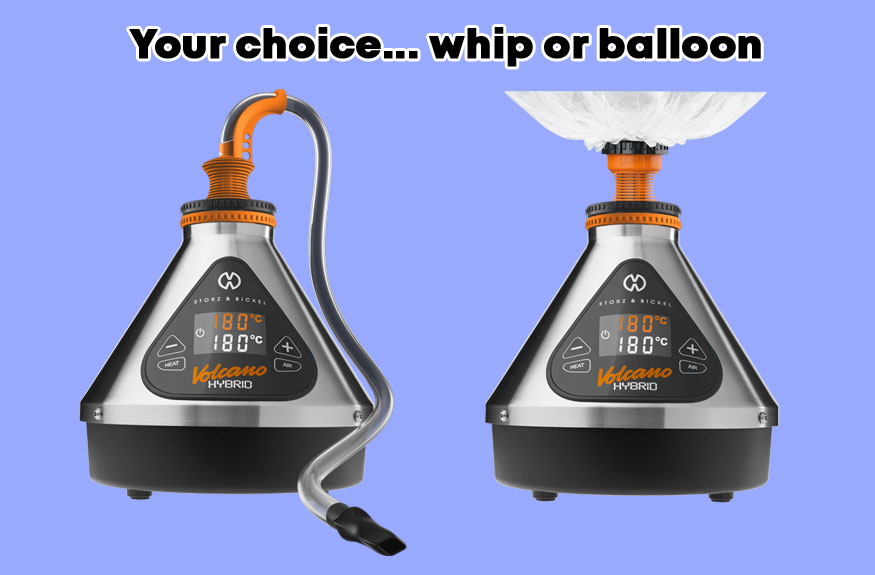 As amazing as the Volcano Classic is the one thing that many people find takes getting a little used to is inhaling vapour via a balloon. The Volcano Classic utilises a balloon (also called bag) system. The Volcano Classic heats up your herb and the released vapour is captured and stored in a balloon, which is then removed from the unit allowing the user to intake all that vaporised goodness utilising a simple but effective valve system. This system works absolutely fine, and is great for sharing, however some people, particularly those used to using a bong or a pipe might find that this mode of vaping doesn't quite feel right.

This is where the Volcano Hybrid steps in. Unlike the Classic, the Volcano Hybrid comes with the option of a "whip"...A vinyl tube that attaches directly to the unit, allowing for the user to draw directly from the Volcano itself. The whip has 360 degree rotation so it allows for convenient use and totally negates the need for balloons. Due to the length of the whip the vapour produced is further cooled...Much the same as a long pipe...Allowing for an extremely smooth and easy toke. Utilising the force of your draw, you determine how much vapour you intake with each session. And with an improved chamber lock you are guaranteed not to lose any of your precious vapour.

The added versatility may not sound like a big deal to everybody, but if you prefer a more traditional toke...Or prefer the balloon... This feature can indeed make the world of difference to your overall vaping experience.

The Volcano Hybrid heats your herb, depending on your preference, between 40-230 degrees celciius utilising a new and improved Dynamic Heating system which is a distinct step up from the basic convection heating used by the Classic. Many other vaping devices heat your herb via contact with the hot surface of a heating chamber. The Volcano Hybrid teases out out all the natural plant flavours by forcing a stream of hot air produced by a 100 watt heater over the surface area of the plant material. Volcano users will tell you that this system of extraction produces the optimum vape. You can boost the amount of vapour produced by switching on the Volcano Hybrid's fan, which makes it perfect for those times when you either you want to add a little more oomph to your solo session or when you are entertaining with friends.

Where as the Classic took approximately 2 - 3 minutes to heat up, depending on how full the bowl is, the Volcano Hybrid takes only an astonishing 70 - 80 seconds to heat. This in itself is an invaluable improvement, cutting down your waiting time right down to the very chase!

Unlike the Classic, which uses a simple a dial to regulate your heating preferences, the Volcano Hybrid goes all out with a digital touch pad and LED display that allows you to finely tune your vaping experiences by degrees as opposed to broad strokes and guesstimates. As reliable as the dial system is the user can not get the same precision in temprature and preference as the digital controls allow for. Heating and tempratures, as vaping enthusiasts will know, are key factors in achieving the density of vapour that you prefer. It also allows you to gently release the individual flavour notes associated with particular strains by modifying the intensity of your session to suit. The finely tuned controls compliment the improved Dynamic Heating system perfectly, putting you firmly in charge of the quality of your sesh.

Once again the superior functionality of the Volcano Hybrid makes it a must for the connoisseur of fine herbs! 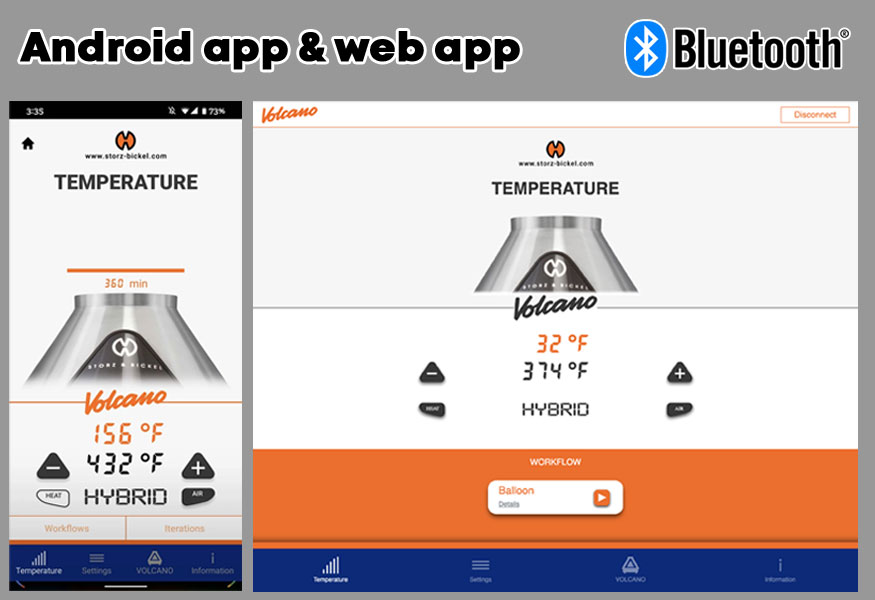 As well as the improved user interface via the digital controls the Volcano Hybrid also comes with inbuilt app Compatibility. This allows you via an Android device or phone to be able to set temprature settings and power controls without even touching the unit itself. Once you have downloaded the app you are given access to an even higher level of functionality. The app allows you to tweak heating times and fan speeds to an unprecedented degree of accuracy. The app will also give you status updates which alert you to when your Volcano Hybrid has reached all your desired session specifications as well as a user guide full of handy tips and maintenance instructions.

With the app all you have to do is hit your preferred session pre-sets and times without having to even spare a thought!

(If you don't have a bluetooth enabled android device, Storz and Bickel also have a web app for use via your web browser.) 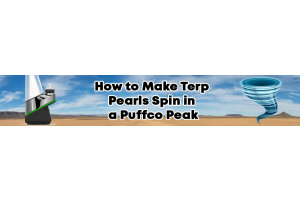 How to Make Terp Pearls Spin in a Puffco Peak 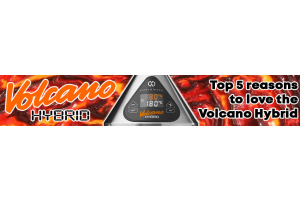 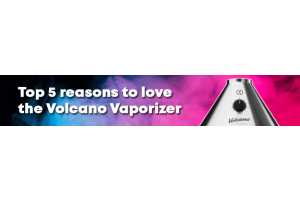 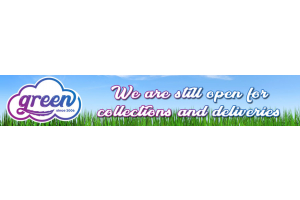 Please confirm you are 18 or over to proceed...